A Valentine Dinner Show by The CompanY at Primus Hotel & Resort 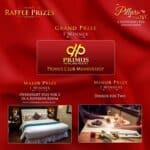 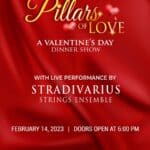 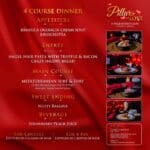 Primus Hotel cordially invites you to a special Valentine’s Dinner show happening on February 14, 2023, at 6:00 pm. Join us in the Peñafrancia Ballroom as we celebrate the people that are our “Pillars of Love”.

Whether it’s your husband or wife, children, parents, or friends let’s celebrate each other with a romantic dinner as you’re serenaded by Naga’s very own, Stradivarius Strings Ensemble.

We also have fantastic giveaways for 4 lucky guests.

Seats are on a first-come, first-served basis. Tickets are transferable, but cannot be refunded online or at the door. For any questions or concerns, please contact our front desk team immediately at [email protected] or call us at +63 917 506 9156.

Be one of the first to reserve your tickets for our Pillars of Love: A Valentine’s Day Dinner Show.

Be one of the first to reserve your tickets for our Pillars of Love: A Valentine’s Day Dinner Show. Guests will have access to the best seats in the house and get a chance to win prizes from our raffle. Get serenaded by the Stradivarius Strings Ensemble and enjoy an exquisite 4-course dinner with your loved one. Happening on Tuesday, February 14, 2023. Doors open at 6PM

**All Fields are required.

Health Guidelines for this Event On February 7, 2022, the CompanY performed Live at Primus Hotel & Resort, a Pre-Valentine Dinner Show as a benefit concert to support the campaign of VP Leni Robredo, and Senator Kiko Pangilinan. The night was filled with kakampinks. Kakampinks is a term used for the supporters of VP Leni and her team. It is a play on the tagalog word “Kakampi” which means “ally”, and “Pink” which is the symbolic color that VP Leni uses for her campaign. The guests who wore Pink and were in support of the Vice-Presidents campaign are therefore coined “Kakampinks”.

The weather was perfect in Naga City. The skies were clear, the weather was warm and breezy it’s as if the day was perfectly created for an outdoor concert. The night was greeted by up and coming performer Ms. Paula Guevara and a plethora of songs from the 80’s and 90’s from various artists, performed beautifully by The CompanY. We prepared a special 4 course meal for all the guests, prepared by our Executive Chef. The Venue was beautifully themed pink to match the color that represented the Vice-President and her team. The entire staff of Primus Hotel & Resort was all hands on deck. Each member of the staff was given a custom pink Primus Hotel shirt to wear during the event, as to also show support for the Vice-President, and her team’s campaign.

The night was cheerful as The CompanY expressed their support for the campaign of VP Leni Robredo, and Senator Kiko Pangilinan. The concert was live streamed by The CompanY globally, garnering hundreds of thousands of view across the globe. Fans from the Middle East, US, and Canada to name a few, chimed in and watched the concert on their devices. The CompanY was half way done with their performance when the Vice-President made her appearance, greeted by the General Manager of the Hotel. This event marked the first ever visit of the Vice-President to Primus Hotel, and it couldn’t have had a better timing as it was the Launching of their campaign the following day.

The CompanY serenaded the guests with their classic hits and sang OPM songs of famous artists from 70’s until the early 2000’s. Imagine a collage, but instead of photos, the CompanY sang famous lines and choruses from the different songs, and placed them together beautifully to create a wonderful medley. Not only that, they performed this a cappella and it gave the a complete showcase of the absolute talent of the CompanY. At one point, the band stepped down the stage and approached the Vice-President and sang for her personally, further solidifying their intent to support her in her campaign this coming election.

The night was coming to an end at around 10:30pm and to place the icing on the cake, the CompanY sang our national anthem albeit with a twist, that saw guests in awe, and sent goosebumps to the audience. It was powerful, it was emotional, and it was CLEAR to everyone in attendance that they all shared the same passion in showing support to Vice President Leni Robredo’s campaign. It was indeed a night we wanted to share with everyone, and a night to remember, especially for Primus Hotel & Resort. It will forever be the first ever official visit of our Vice President, and we’re glad it happened when it did. The stars aligned that night, and everything was executed perfectly, and flawlessly.

As guests in the hotel, the CompanY was nothing short of courteous. Throughout their 2 night stay, they were polite, warm, welcoming, and entertained photos for the staff when they requested for it. We were honored to host the CompanY, and we bid them the best in their endeavors, as they continue to support the campaign of the Vice-President nationwide. We look forward to having them again soon, whether for personal or official trip, Primus Hotel & Resort will welcome the CompanY with open arms.

Primus Hotel & Resort is a luxurious hotel located just outside of Naga Centro. Enjoy a wide selection of food, wake up to breathtaking views, and fresh surroundings, and experience one of the best coffee Naga City has to offer.

Please complete the form below with your event details.